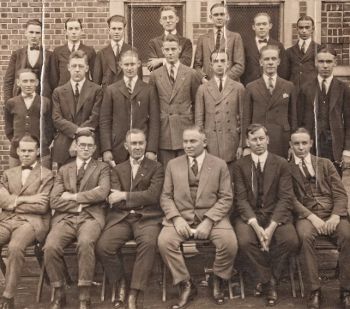 Walt Disney of any 100 young men who join DeMolay, five of those 100 will become Master Councilor of their DeMolay chapters. And at least one of them will later say that he valued that experience above his college degree. Eighty or more of the 100 will go on to complete some form of post-high school education.

Many of the 100 will find their vocation through other DeMolay involvement, such as Merit Bar work. DeMolay has produced a good number of men, who after serving as chaplain of their local chapters, went on to become ministers or pastors. Along those same lines, several of the 100 DeMolays will first be introduced to some form of organized religion by attending some church or temple through a chapter function.

Of any 100 young men who become a DeMolay, thirty will drop out in their first year. Perhaps this may be regarded as a failure. But in later life, most of these will remember that they have been in DeMolay and speak well of the program and the lessons it teaches.

Of any 100 DeMolays, only rarely will one ever appear before a juvenile court judge or be in any trouble with the law. In fact, DeMolay produces a great many lawyers. And, although the percentages are not known, many of the 100 will join the military. Each of the 100 will learn something from DeMolay and most all will benefit from their association with the fraternity. Again, the percentages are not known, but a considerable number of the 100 will also go into the Masonic Lodge in later life. Of the 100 who join Masonry, many will serve as a head of one of the Masonic organizations.

A number of the 100 come from single parent families and look to their advisors (Masons) as positive role models. One out of the 100 will be awarded the rank and honor of Chevalier, the highest honor granted to an active DeMolay. Approximately sixteen of the 100 will value their time in DeMolay so much that they will "give back" to DeMolay by serving as an adult volunteer in later life.

One hundred DeMolays ... equals a high number of leaders.