DeMolay is an organization dedicated to preparing young men to lead successful, happy, and productive lives. Basing its approach on timeless principles and practical, hands-on experience, DeMolay opens doors for young men aged 12 to 21 by developing the civic awareness, personal responsibility and leadership skills so vitally needed in society today. DeMolay combines this serious mission with a fun approach that builds important bonds of friendship among members in more than 1,000 chapters worldwide.

Is DeMolay a religious organization? No. Among the requirements for membership in DeMolay is the belief in a Supreme Being, but not one of any particular doctrine, sect, or denomination. A young man’s religious convictions are his own. DeMolay’s members include Christians, Jews, Hindus, Buddhists, and members of many other religious groups. DeMolay does not involve itself in religious discussions. It merely recognizes the importance of faith in the lives of young men. The virtue of Reverence for Sacred Things seeks to remind our members to rely upon, and use, faith in their own personal lives.

The main event that lead to the founding of the DeMolay movement was World War I. This was a time when the nation was caught up with a passion and desire to bring democracy to the world. When the United States joined in the fight against German power, every resource of men and materials was poured into the war effort. America suffered not only the loss of its men who had fallen in battle, but on the homefront as well. A positive response to this critical situation came about with the development of many charitable organizations. Frank S. Land was selected to act as the director of the Masonic Relief and Employment Bureau of the Scottish Rite of Freemasonry. This charity would come to help hundreds and hundreds of families.

Near the end of the war, Land became concerned with the problems of boys who had lost their fathers. He thought "how lonely it must be for a boy not to have a man to talk with, or a man to provide some type of inspiration and direction." Frank decided there was a need for an organization where boys would have the opportunity to associate with other boys, a place they could share common interests, learn responsibility and other skills that would benefit them throughout their lives. His ideal model for this organization included having business or professional men, Masons, taking interest in the young people, being a friend to them, advising them, and perhaps even providing them with employment opportunities.

In March, 1919, Land met with young Louis Lower. Louis' father had died, leaving the young man without a father figure in his life. Land took the time to listen to Louis, learn about his dreams, and to help him. He learned that others, like Louis, sought companionship, leadership, inspiration and competition. He asked Louis to invite some friends to a meeting, the original group of nine DeMolays: Louis G. Lower, Ivan M. Bentley, Edmund Marshall, Gorman A. McBride, Jerome Jacobson, William W. Steinhilber, Elmer Dorsey, Clyde C. Stream, and Ralph Sewell. At the second meeting, there was a total of 31 young men present. They were excited about their new club!

The group needed its own identity and its own name. After Dad Land related the story of Jacques DeMolay, the group decided to name itself for this historical figure connected with Masonry. 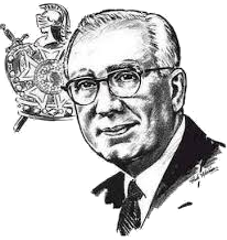 Dad Land, as he came to be called, provided the philosophy and principles to be embodied. As interest in DeMolay spread, Land answered many requests for information and authority to start chapters. Initiations and ceremonies took place in all locations. By the fall of 1920, Mother Chapter had developed activities for its members as well. These included an outstanding baseball team, a DeMolay marching unit, and even a 100-piece band!

By the end of 1921, Dad Land realized he had to devote full time to this new organization and become a full time DeMolay employee. As DeMolay chapters grew in numbers and strength, the organization as a whole grew in prestige. With this greater prestige, interest developed in the Masonic fraternity. Official recognition and approval by Masonic groups began giving their seal of approval to foster DeMolay in their states. Many distinguished organizations endorsed DeMolay including the General Grand Chapter of Royal Arch Masons, Grand Lodges, Knights Templar, etc.

A devoted champion of Freemasonry and of its teachings, Land would become a figure of international prominence within Masonry, eventually becoming Imperial Potentate of the Shrine of North America. He counted among his friends U.S. Congressmen, state governors, movie and radio stars, military leaders, leaders of industry, Presidents of the U.S. and a veritable legion of young men in their teens.

Dad Land worked tirelessly for the Order of DeMolay until his death on November 8, 1959. Hundreds of other devoted workers aided in the creation and extension of the Order of DeMolay, but looked to one man for guidance. Frank S. Land was the charismatic leader of the Order. Frank S. Land was truly a great man, a proud American, and a person who came to be known by millions, simply as "Dad". Frank Land's life touched, and continues to impact generation after generation of young people, young men looking to better themselves by emulating the lessons and examples by which he himself lived.